Vermont evokes different images for different people. Because Vermont is nestled snuggly in the northwestern corner of New England, some picture it as a completely rural state full of snow-laden pine trees, Martha Stewart crafting types, and cows whose only job is to supply the world with Ben & Jerry’s ice cream.

Your image of Vermont will depend on whether you know the state via Hollywood (White Christmas, Funny Farm, or Newhart, among others), or if you have actually been there. For Round Table editor Sheila Trask, who lives as close to the heart of Vermont as you can get, it’s simply called home.

Sheila was born in Vermont and has barely moved at all, building her home only two miles from where she grew up. Her father and brother built the house she now lives in with her husband Ian and a co-dependent golden retriever she inherited and who, Sheila says, would “shower with me if I let her.”

Sheila may not be able to see her neighbors’ homes beyond the rolling hills that surround her home, or hear them over the rush of the nearby brook, but she knows she can depend on them. Vermonters keep to themselves but come running at a moment’s notice whenever there’s a need. When asked if she’s like that, she said, “I am. I think it’s a Vermont trait. There’s a way that Vermonters don’t bug each other most of the time, but when there’s a crisis, they’re there. After Tropical Storm Irene, my area looked like Mad Max. All of sudden, everyone came out with their four-wheelers and chainsaws, cleared the road of downed trees, and then went back home.” 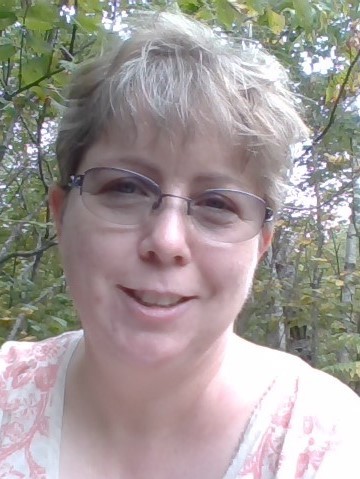 Growing up rural, “where reading counts as conversation,” meant that books and libraries captured Sheila’s heart early on. Reading books and being surrounded by them was an early passion for Sheila. “I have read for as long as I can remember. Constantly.” It’s a love that led her to start a library career at a research and development firm where her job duties included, among other things, “translating engineer-speak for researchers into something people could actually understand.” She went on to earn a master’s degree in library and information science, work in the Dartmouth College library, and eventually take a position as head librarian at New England Culinary Institute, a job with a dangerous perk—the pastry students were always bringing in their “homework” for her to sample.

Meanwhile, Sheila and Ian decided to adopt their son Tristan from South Korea, and she put her career on hold. He arrived at just seven months old, weighed eighteen pounds, and was accustomed to being carried everywhere and not happy about the transition from his loving foster family to this new home on the other side of the globe.

As he settled in and grew up, Sheila began looking for other work that engaged her talents and curiosities. “I started various side things—reviewing books, writing articles—while Tristan was little.” She had thoughts about returning to more full-time work when Tristan started grade school, but life had other plans. “Let’s just say Tristan made a big impression on his first-grade classroom. He had ADHD, he was smart, he was impatient, and he would always find some way to make his day more stimulating, often to his teacher’s dismay. School and Tristan did not mix.” 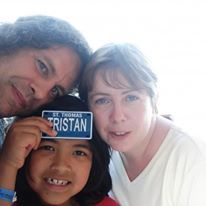 The solution was a surprise to Sheila, who had always thrived in the conventional school system. “We made the decision to homeschool.”

Homeschooling parents don’t have a lot of free time, but Sheila used the time she had to take her love of books to a new level by reviewing books and critiquing manuscripts. “I took a copyediting course and learned I am not a copyeditor . . . You’d think as a librarian I’d really enjoy the details, but it’s not so.” Though she might not thoroughly enjoy reading with a magnifying glass, the experience offered contrast that showed her what part of editing she enjoyed most. “I’m completely a developmental and first-draft editor. I love that moment when I discover that a book is about this!”

More than just her love of reading, her new career allowed her to interact with a variety of different people. “I’m ridiculously open-minded. I will talk to anybody about their truth and their reality with no judgment. I’m going to take their word for it and will explore what they’re exploring, which has led me down some weird paths.” This open-mindedness and the safe space Sheila creates in her conversations allows for her clients to open up about things in their lives they might otherwise not want to share. She worked with one author who was odd by his own admission. “He told me, ‘Most people find me a little off-putting,’ and I was like, ‘I’m having so much fun!’”

When asked if it’s more important for the spirit to run deep or quick, she answered, “Deep is a must, but quick is fun. I think I want everyone to be Robin Williams.” Interesting. “He was so sweet, so gentle a soul, but so brilliant. I like people to go fast and think strangely. I love to follow along with that.” 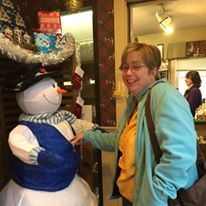 For now, she’s learning to rediscover herself as a recent empty nester. “Never before have I been a person who’s been into crafting, but now I love felting. I have a room full of wool!” Maybe that image of Vermonters isn’t too far off the mark.

But Sheila is not done. While she will continue working hard to bring client’s dreams of books to full fruition in ways they never imagined, she wants to have an even bigger impact. Asked what’s next, she says, “Oh, you know, just save the planet. I want to commit more of my energy to fighting climate change.” One organization she is working with played a key role in Tristan’s unconventional education—EarthWalk Vermont, whose mission is “To inspire and empower children, families, and communities to reconnect with and care for one another and the Earth through long-term nature mentoring.”

Sheila probably will help save the planet and then go back home in true Vermonter spirit. And, like Robin Williams, she will leave a legacy of impact and kindness on brilliant people who go fast and think strangely.