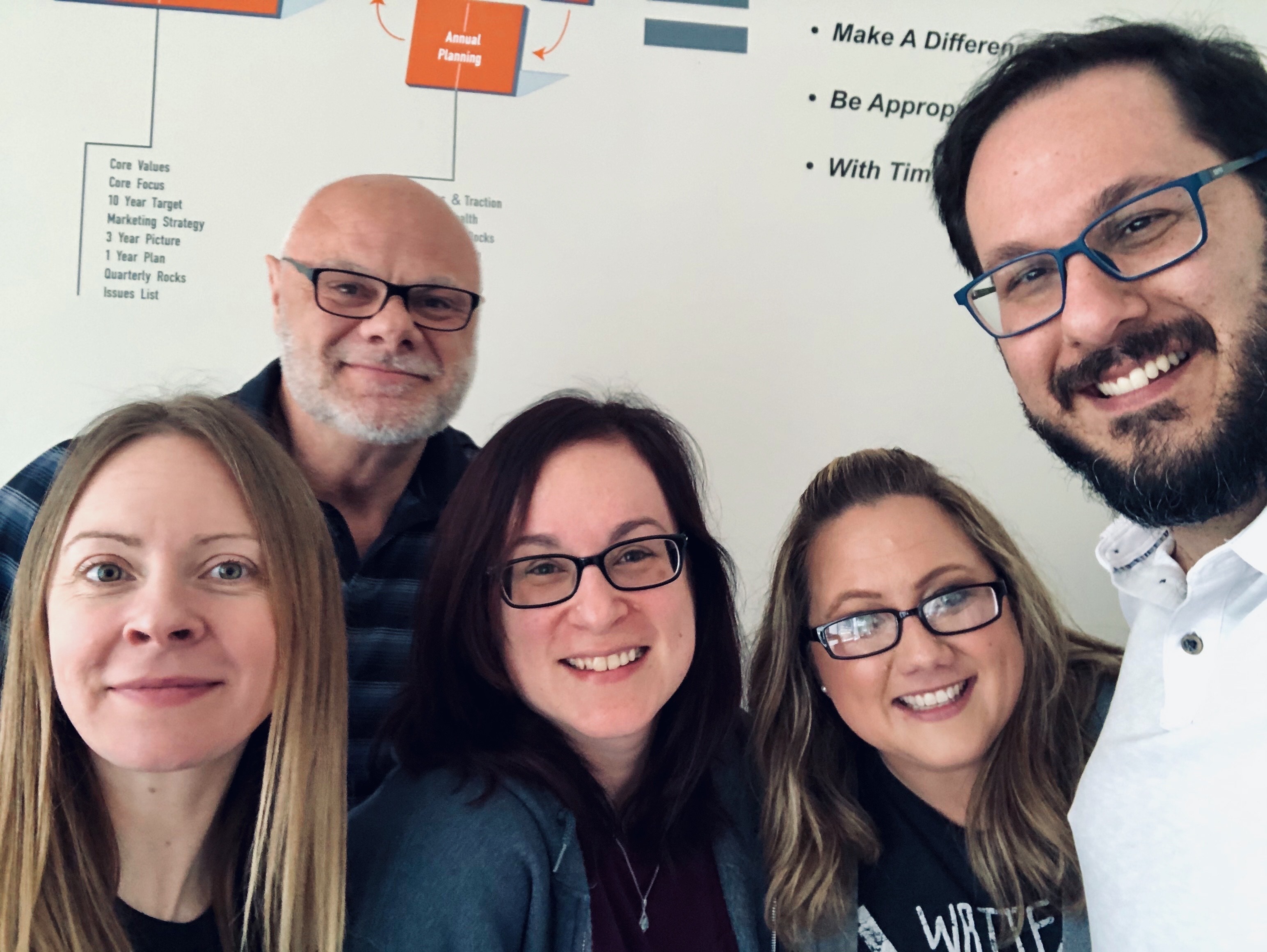 RTC and EOS: Love and Traction

By: Agata Antonow in Business Storytelling
on July 16th, 2020

Pull up a chair to the table. In front of you is a laptop. Press the “start” button, and you’ll notice there’s no operating system. The screen remains stubbornly blank, and you can’t access any software or features. Any files or information on the computer are out of your reach.

How well would you work at that laptop?

For some members of the senior leadership team at Round Table Companies, this is what running meetings and the company felt like before 2018, when the company started using EOS. EOS (the Entrepreneurial Operating System), like any operating system, helps different parts of the company communicate effectively and provides structure for getting things done.

Yolanda Knight, director of client relations, appreciates the fact that EOS brings clarity, especially when it comes to roles and vision. In many ways, the core of her job hasn’t changed. She has always cared for RTC clients, connecting with them and working on creating a vision they can get passionate about.

Before EOS, Yolanda felt like she was “on a roller-coaster.” No matter how many clients she brought into the Round Table Companies family, she never knew how well she was doing. There was no clarity. Even her own job was in flux. Sometimes she was Corey’s assistant. Sometimes she was in sales. Sometimes she was following her passion and supporting clients. It was as though “you’re trying to climb the mountain and never get to the top,” she recalls.

Then one of Corey’s clients introduced him to EOS. Corey brought it to the leadership team, and Yolanda became excited about the possibilities, especially once she saw the changes in her role and in the company around her. In 2020, two years after starting on the EOS journey, “I feel like I belong now,” Yolanda says simply. With data and clarity about the vision of RTC, Yolanda can focus on supporting clients, and she can see how she’s doing at that task. There’s feedback. When there’s a problem, that feeling of climbing the mountain again and again are gone, because issues are brought up once and handled with EOS.

“It was as though “you’re trying to climb the mountain and never get to the top,” she recalls.”

Most of all, Yolanda’s role is clear—and it came with a few surprises. Part of EOS is meeting regularly with the implementer, Chris White. Chris is not only one of the most recognized EOS implementers but also the host of the Tractionville podcast.

In Chris, Yolanda found something of a mentor. RTC’s implementer saw potential in Yolanda and guided her to take a fuller leadership role, carving out a path for her to take on new responsibilities and find her voice.

Yolanda wasn’t the only one who noticed. At a meeting, Corey turned to her and commented that Yolanda had started as his assistant but had grown into a true leader at the table. For Corey, the changes in Yolanda after two years with EOS are significant: “Her confidence has exploded and that has allowed for her heart to shine even more.” For Yolanda, life and work with EOS means the freedom to be the leader she always was. Now, the “training wheels are off,” and with new clarity on the road in front of her, she can fly into the future.

When Kristin Westberg first became president at RTC, she wasn’t thinking operating systems. What she wanted was some instructions. “There was no manual for president,” she remembers. “It was hard because I didn’t have defined roles and responsibilities.” Even introducing herself as president at events was difficult at first.

When Corey first floated the idea of EOS, Kristin was both relieved and excited. Finally, here was “the playbook I needed to do my job.” With EOS in place, Kristin helped define what her own role was, which in turn made her more confident as a leader and gave her a voice. As an integrator and as president, Kristin now understands that part of her role is to “hold the line” and to help firmly say, “This is what we need to be doing.” The parts of her job that don’t belong fall away with this clarity, leaving Kristin free to focus on the true parts of her role—the ones that create the biggest difference. 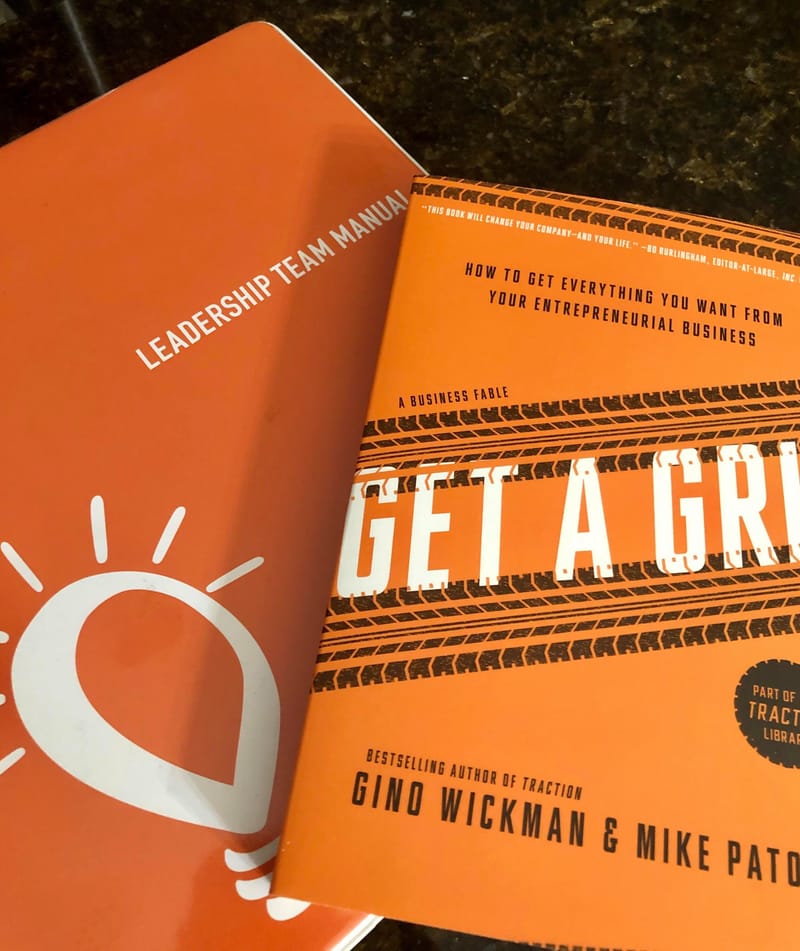 With the EOS journey also came greater clarity about staffing, which brought with it challenges, encouraging Kristin to grow as a leader. With EOS, the goal is to have “the right people in the right seats,” and RTC had always thought that’s what the company had. Through EOS, Kristin realized some people had been assigned positions because leadership was “hoping they could grow into the role.” This led to some difficult talks and even painful moments—conversations and times EOS provided a structure and even language for.

On the other side, this has meant that it’s not only Kristin who feels more fully in ownership of her seat. As she reports from the data she has gathered, “people are reporting they are all around happier, have greater trust in management, and are ambassadors for our organization.” And as for Kristin herself, Corey has noticed that “with EOS, she is almost an entirely different person.”

For Sunny DiMartino, the director of publishing and visual design, her entry into EOS was somewhat out of character. As she herself admits, Sunny loves to research and compare ideas before choosing a path. But in 2018 she was on one of the early calls with the EOS implementer, who was explaining what EOS was about.

When he was done, Sunny was one of the first to say, “Yes, let’s do this, let’s just do it.” The un-Sunny response was a recognition that EOS could help with what she calls “backburner burnout.” For a while, the company had felt siloed and chaotic, which caused Sunny stress and made her role more difficult.

With EOS implemented, Sunny, who had been a department head, found herself at the senior leadership table. She also saw what she calls “incremental changes” in the right direction. After years of spinning wheels, things were getting done. RTC reworked contracts, got the budget on track, created and rolled out an HR manual, documented its processes, and sent out a citations guide to all writers and editors. When she first started working with EOS, Sunny had a “wish list” of benefits she wanted to realize at RTC. Looking back two years later, she realized RTC and her department were on track to implement all of them. Sunny felt pride when she looked at tangible accomplishments and progress made. Working together on progress also felt like teams were pulling together in the same direction.

“I know that a smoothly running operation will be good for my health and happiness. It might mean actually taking vacations!”

For Sunny, the EOS difference is personal, too. There’s a greater sense of calm when she turns on her computer now, knowing there’s a system in place to support her, no matter what her next steps are. And Sunny believes that EOS will mean less stress and a chance to focus on persona goals: “I know that a smoothly running operation will be good for my health and happiness. It might mean actually taking vacations!”

Round Table Companies is a company founded on love. While love is a beautiful place to start, as the company grew, it needed to include professional systems to drill down and define processes. What does love look like for us? What happens if we need to troubleshoot? Who decides what our values look like at our organization? How do we show up to work every day in a way that honors what we’re truly meant to be? EOS has given leadership the voice and structure to ask these questions—and start putting together answers.

Of course, like any good operating system, there are updates and changes that get made. There’s a reason no one’s running Windows 95 anymore. In the future, the leadership team is considering rolling out EOS to the editorial team. There is ongoing work to be done in getting the right people in the right seats, defining roles that need to be filled, and gathering more data. There are still “messy” transitions and processes, which need to be resolved. But with a system in place, it’s easier to upgrade and update than to reinvent the wheel. With EOS, RTC has a reliable way forward.