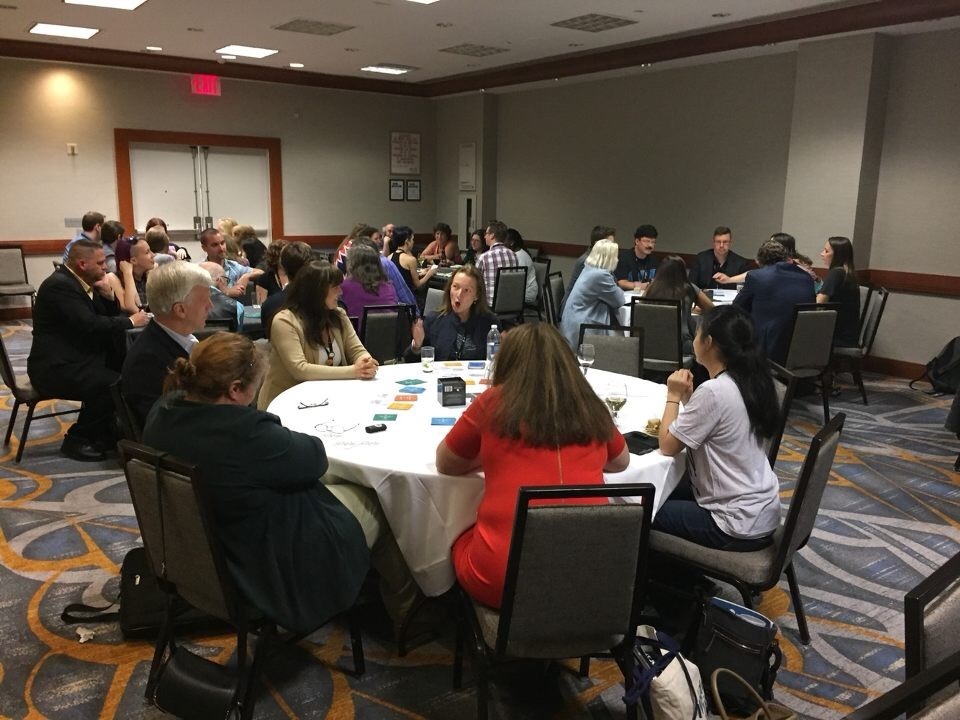 Why Vulnerability is Crucial to Business Storytelling

“Vulnerability is the emotion that we experience when we feel uncertain, at risk, or emotionally exposed.” —Dr. Brené Brown

I was starving. My stomach complained loudly and gurgled its way through the only contents I’d offered it that evening: two vodka martinis, dirty. But my blood alcohol level was low—I had consumed them over two hours—so that’s not why I was baring my soul to strangers. That’s just not how I roll, drunk or sober. But there I was—an introvert with a history of social anxiety—in the Big Apple, probably the most anxiety-inspiring city in the US. Instead of meeting my new friends in the bar, I was still sitting and talking with a stranger. It may have been the most thought-provoking conversation of my life. How could I be so open, so . . . vulnerable? Here’s how.

A few years ago, I came to the realization that I was on the wrong career path. I’m a writer (obviously) and storyteller. I needed a new start. So, I bought a Writer’s Digest magazine and saw the ad for their annual conference. My gut said, “Go!” and, for a change, my wife agreed. I committed, paid my registration fee, booked a room, and proceeded to freak out. What scared the Poe out of me was Saturday night’s itinerary: cocktail reception.

I’m an anxious introvert. What had I gotten myself into?

But a peculiar thing happened. On the conference’s Facebook group, some guy started posting weird questions like “Can you describe the kind of pain that being a writer has invited into your life at times?” I was hesitant to answer, remembering my mom’s terrifying advice regarding strangers on the internet. However, one brave attendee commented on how she struggled with other life demands while making space for writing. Then another spoke up, and another. Another odd thing: complete strangers began cheering and encouraging each other.

The guy posting these bizarre questions was Corey Blake. Who is this guy? I wondered. So I clicked on his profile and saw that he started some business storytelling company called Round Table, which was also the conference’s top sponsor. Aha! He just wants to engage us so he can pilfer our pocketbooks. (I have a wallet, but still.)

I was skeptical of his motives. But each day, as the conference approached, he posted something new. And each day, in the comments, I read the impossible—other writers feeling like I did: hopeful, anxious, and not sure if they belonged.

Vulnerability Is a Secret Sauce for Storytelling

I’d learned some things about being vulnerable from Dr. Brené Brown’s work, but despite what I’d learned, I still had a warped view of what it meant to be vulnerable. To me, vulnerability meant slitting yourself open and letting your emotional guts spill on the table for all to see. What fun! Why aren’t we all more vulnerable?

Besides, I’m a man. I’d been raised with the idea that being sensitive and kind was for wimps. Straddling the fence between two paradigms is tough enough. For a man, straddling that fence is even more painful (pun intended).

I arrived at the conference, met Corey, and learned he was not a corporate shark hiding behind a lamb’s mask. In fact, I knew he couldn’t be a corporate shark: they don’t laugh that much. Then he asked, “Are you coming to our game?”

I steeled my resolve. “I think so.” I don’t get much more determined than that.

When Saturday’s final keynote ended, I was so eager to avoid the cocktail social that I rushed to get a seat at the game. But I had a drink coupon. I needed a drink. Fortunately, Aleks from the RTC team offered to get my drink for me.

Thank God (and thanks again, Aleks)!

I picked a table with a few familiar faces. I had already met three of the people earlier in the conference but didn’t feel comfortable with them yet. On the other side of the “round table” sat three complete strangers. The seven of us made small talk, and I waited for the vodka martini to kick in. Then the RTC people, one for each table, sat down—Corey at mine—and explained the rules.

“There are three stacks of cards,” Corey explained with a sinister smile. It wasn’t really sinister, but it felt like it was. He described the three stacks of cards—Break the Ice, Laugh a Little, and Get Vulnerable—and what they were about, then explained the cards with encouraging words that you could award to a player for a particularly vulnerable or genuine answer. But then he described the kicker: “After your turn, select a card from this stack to determine who goes next.” That’s right. There was no going around the table, passing Go, or collecting $200. You never knew when it was going to be your turn.

Superb. I had no time to prepare.

Learn more about vulnerability and storytelling 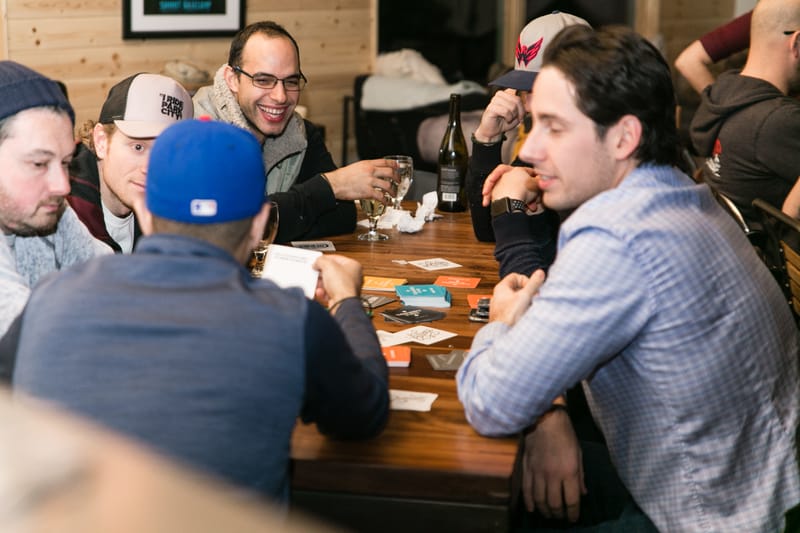 Play began, and it was actually fun. We were devouring the Break the Ice and Laugh a Little cards, but nobody touched Get Vulnerable. That is, until Joe, a tall, distinguished gentleman from California, said, “I’ll take the plunge,” about ten minutes in.

With his warm baritone, he read the question aloud and then dove into the answer. He hesitated at moments, looked at the ceiling, and I saw that large chest heave a few times as he opened up to the rest of us.

I’ll admit it, I’m a little judgmental. It’s a part of me—a coping mechanism—I don’t like. When I looked at Joe, I put him into a neat little box: friendly, successful, Ivy League, confident, a little high-brow, possibly snobby and condescending. Turns out, I was correct on the positives. He may even exhibit the negatives from time to time, but all I witnessed that night was this bear of a man courageously showing he was anything but a bear. My box disintegrated, and I saw Joe: a wounded man.

What happened next was nothing short of remarkable. The next person chose a Get Vulnerable card, and then the next, and the next. Because of Joe’s courage, I had permission to be courageous.

I heard about broken hearts and heart-breakers. I watched faces relax and expose well-hidden insecurities. I admitted to my own doubts and regrets—most of which only my wife had known previously.

In this warm group, there were no eye-rolls, whispers, or demeaning snickers. I felt seen. Heard. No longer did I see neatly compartmentalized companions. Instead, I felt a connection that transcended our varied experiences. While our paths may differ, our emotions vary little, and in that we are all alike. We answered questions like “What’s one thing you respect about your company?” and “What have you done that might put you on Santa’s naughty list?”

One by one we squirmed, sighed, and closed our eyes before answering. “Nothing—the owner only cares for money,” and, surprisingly open, “I dated a wonderful woman who I hurt badly with my decisions.” The latter person went into detail about all the ways he was a jerk to her. Then he received a flurry of Core Value Cards, each with one word on them like Courage, Growth, Brilliance, Honesty, and Love—think: real-world “like” buttons.

The game was boxed, we parted ways, and a few of us decided to head to the bar for a late dinner. As I was getting up, there was a moment of small talk between me and a young lady named Fox (her pseudonym). Our worlds could not have been more different. Had we met in a subway instead, we may not have even given the other a glance.

What Happens After the Vulnerability?

But we had shared space for each other. She was angry at the world. I was scared of it. The reasons don’t matter because we both knew what the other felt. Idle conversation evolved into comments on society, and then the dread p-word came up . . .

We’re on opposite sides of the aisle, and we both held our own convictions. Had we met on that aforementioned subway, it might have been a snarky, mean-spirited exchange of jabs. Not here. Not after what we shared. We were both people. Fragile, wounded people yearning for joy and love. She listened to me. I listened to her. We acknowledged our perspectives and differences.

In the end, there was little agreement. I can’t speak for Fox; however, I can say that I heard her viewpoint, and it opened my eyes to why she felt how she did. Maybe I had the same effect on her.

We later joined our friends in the bar and shared drinks and food until midnight. To outsiders, we must have appeared a misfit bunch. Kids in their twenties with some middle-aged folks. A mixture of dyed hair, piercings, torn jeans, blazers, pressed Oxford shirts, and one nerdy graphic tee. We were not misfits, though, and we knew it. No. We fit fine. We were human.

Vulnerability, it turned out, was not psychologically eviscerating yourself as I’d thought. It was letting others see behind your mask. And, in turn, when we get a glimpse of who they are, we don’t see monsters—we see ourselves.