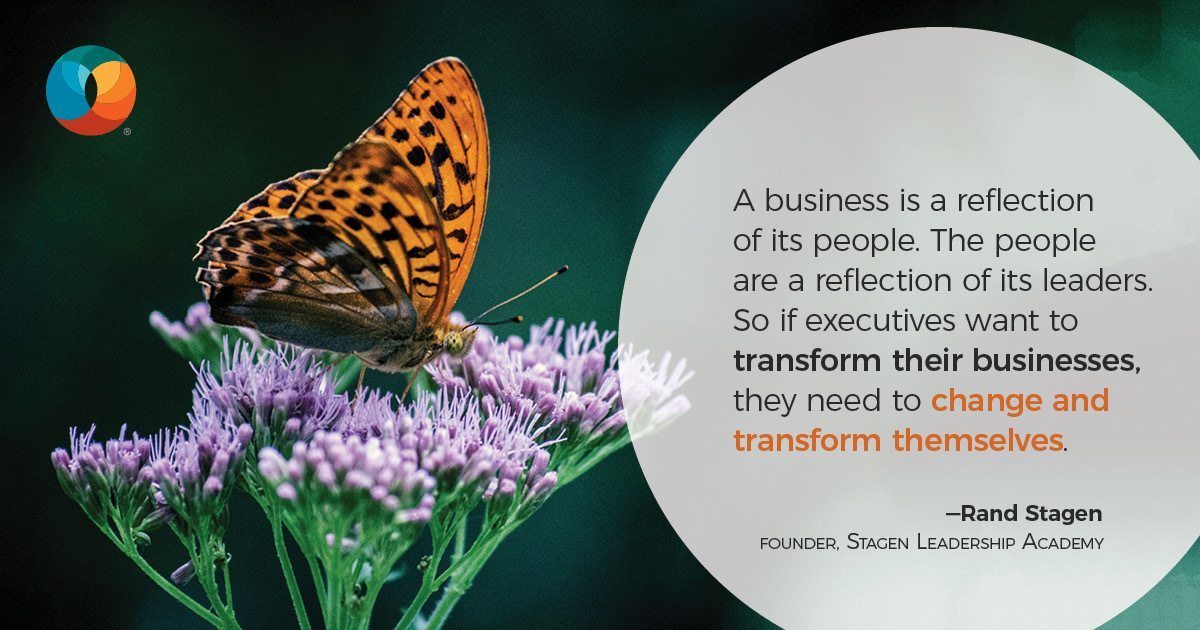 The Gift of a Clear-Eyed Truth Teller

By: Geoff Campbell in Storytelling in Business

A Note from the Editor: This article is a challenge to our CEO community. How engaged are you in your own transformation as part of your journey to running a conscious company? After you’ve read the article, please let us know what gets in the way of your own commitment to personal development.

“I’ll never forget this CEO who approached me with a story about his marital difficulties,” explained Rand Stagen, founder of the Stagen Leadership Academy. “He said he knew he needed outside help but couldn’t figure out why the help wasn’t working. He told me, ‘I went to my network and found the best counselor money could buy. Then I sent my wife to the counselor.’”

Stagen, a member of Conscious Capitalism International’s Board of Directors, who has taken over 1,000 CEOs through the intensive leadership development program he has run for the last two decades, said the anecdote provides a glimpse into the minds of many leaders of huge organizations. Why aren’t there more CEOs of public companies talking about Conscious Capitalist principles? According to Stagen, Fortune 500 CEOs get to where they are by being masters of outsourcing and delegation—but those tactics don’t work when it comes to fixing a marriage or adopting Conscious Leadership to transform an organization. A big part of the Conscious Leadership ethos he teaches is a commitment to playing the long game. “If you can’t commit to the long game, you can’t be in the movement,” he said. “You can’t buy this, you have to earn it.”

Time and again Stagen is approached by busy executives who say they want a Conscious Culture and ask him to “do” it for them—to train their team, implement the purpose statements, and make all stakeholders feel heard and valued. But as Conscious Leaders know—that’s not how it works. Like marital counseling, this kind of growth only works if the full team is involved.

He added: “Conscious Leadership is an inside job.”

So much of Conscious Leadership is about being intentional and deliberate. Consciousness requires awareness, and when you’re aware, you can make better choices.

Stagen said he finds that business leaders often dislike talking to him because he doesn’t mince words about a leader’s outsized role in setting a business’s tone.

“You can’t outsource your development as a leader, which means you need to accept responsibility,” he said. “If you’re not happy with your organization, in whatever way, don’t point fingers and try to externalize the problem. Whatever you see in your organization is a reflection of you.”

Some executives may shy away from the work because it requires intense self-awareness and vulnerability.

Kristin Westberg, president of Round Table Companies (RTC), said she had a sudden flash on the plane home from her first Stagen session. She wondered whether she even belonged in such a group of business leaders, let alone as a company president.

“How could a 36-year-old work-from-home mom of three be a president of a company and be taken seriously?” she says she asked herself. “Did I even know what it meant to be a president?”

But Westberg leaned into her discomfort and discovered she was no different than any of the other leaders. They all questioned themselves and their abilities.

She said her willingness to be uncomfortable and vulnerable—things RTC emphasizes in its work with clients—allowed her to keep taking risks within the program.

“I just decided to cannonball into the deep end of the program versus dipping my toes in the water, which is my usual MO, and that risk had big rewards,” she said. “When I was recognized as the First Quarter Black Belt award recipient, out of all my classmates who were accomplished leaders in their own right, I was able to put my own imposter syndrome fears aside and accept that I had a place in this room, this conversation, this realm, and I was going to grow as a leader because I was ready to swim in this space.”

Westberg said the program was rich in practical support in areas like execution and project management, things she was able to bring back to her company to support growth. But she said some of the most profound work was intensely personal.

“Being able to distill my own values separate from those of my company’s was key to me standing in my leadership and owning my own space separate from our company CEO and his vision of the company,” she said.

Stagen said he isn’t trying to be contrary or harsh when he forces executives to see the need for personal transformation if they aspire to organizational transformation. Noting the Oscar Wilde quote—“True friends stab you in the front”—he said truth-telling with business leaders is a gift of love.

Despite his reputation as a clear-eyed truth-teller, Stagen said he’s still approached by CEOs who want their companies to become conscious organizations but who aren’t willing to spend the time it takes. They instead ask whether they can send their head of HR.

He adds: “The strategy and the purpose are internal. That’s the inside job of both leadership and business strategy.”

Stagen said there’s a congruence between what effective business leaders say and what they do. What’s more, this congruence attracts like-minded people who either want to work for the company or support it as customers.

But CEOs who aspire to infuse their businesses with consciousness—and congruence—must understand that this deeper work represents a journey, not a destination.

“Transforming a business into a conscious business is a five- to ten-year journey culturally,” Stagen said. “You have to relax into this work and play the long game.”

Stagen said he’s met with scores of CEOs who demonstrate an intellectual understanding of emotional intelligence—a hallmark of Conscious Leadership. But just because leaders can talk about empathy and connection doesn’t mean it exists within their companies.

“Direct reports I spoke with would often say there is no emotional connection, no trust or intimacy,” he said.

Stagen said the CEOs were universally bright and clearly understood the concept of emotional intelligence. They just didn’t have it. And this gets to the heart of the matter: Conscious Leadership is about accepting unconditional responsibility for every aspect of your business.

This article originally appeared in Elevations, the Conscious Capitalism blog.