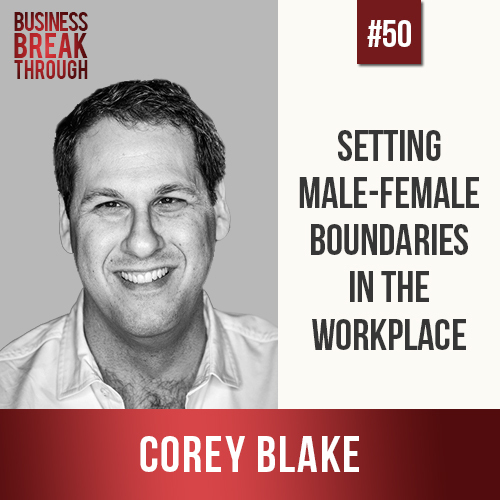 Setting Male-Female Boundaries in the Workplace

By: Corey Blake, CEO Round Table Companies in Storytelling Sessions
on March 11th, 2019

Corey Blake reveals the contents of that big black hole inside each one of us called vulnerability through the art of storytelling and writing. Through his journey from actor to producer to copywriter to now CEO of Round Table Companies, Corey has become an expert in helping people open up their deepest feelings and emotions and spill them out on paper. In this episode, Corey not only shares his incredibly moving and relatable story, but he also explains the law of vulnerability which takes people’s weakest points and turns them into literal works of art.

The intensity of the environment and relationships in the workplace, exceed anything that most people have previously experienced during school and college. The amount of time, stress and experiences shared with work colleagues is immense, and many people are not emotionally mature enough to handle themselves correctly in this type of setting. Often, this leads to inappropriate behavior and many red lines are crossed, which not only jeopardizes relationships but can also jeopardize business and team operations.

To avoid creating any horrible situations or doing anything stupid, it’s crucial to set up boundaries around yourself when you are not sure that you can be trusted. These boundaries are not about being mean and unfriendly, but about building a professional relationship where you can be kind and open, but not personal.

It is equally important to open the conversation about relationships in the workplace online. Speaking and discussing this issue can build awareness before any boundaries are crossed and not after, which is usually when we all start talking.

1. Revenue Goal: what are our financial goals?

2. Serving Goal: what do you want to give to the world?

Polarity work is the process of paying attention to two seeming opposites and realizing that there is value in both. For example, there is value in both revenue-driven business activities and altruism. It is possible to do both and in fact highly necessary to pay attention to both constantly. By focusing only on one, you go hardcore into it until you are sick of it and it turns sour. You then rush to the other extreme and go hardcore into that until it too becomes sour.

The only difference between for profit and not for profit businesses is the order in which we place money and activity. Businesses do activities to get money. Not-for-profits get money to do a set of activities but BOTH involve money!

Most people today go through many different careers during their working life. Often we put our past career behind us and don’t use the skills we have acquired. However, stacking all our skills together to form a unique whole can help us excel in our next job and next role.

In 2018, Corey adopted an EOS which was a total game changer but most significantly it allowed him to provide his President with a plan book and structure to move the business forward. This has afforded Corey extra freedom and led him to start thinking about the next evolution of his artistry. After so many years of helping others to uncover their voice and bring their story to the world, Corey feels that he too has a message to bring to the world and has been toying with the idea of public speaking. But, Corey is intimidated by the idea of uncovering his voice and discovering his unique message. What is Corey’s unique message that he should bring to the world?

Throughout Corey’s journey, the underlying thread has been the balance between the drive for money versus his desire to shine the light of creativity on the world. For example, Corey’s career in commercials brought in money but didn’t shine much light, which is why he opened the film companies. Corey’s core brand and the message that he can bring to the world is how to synergize the two.

Wondering how to practice vulnerability at work?