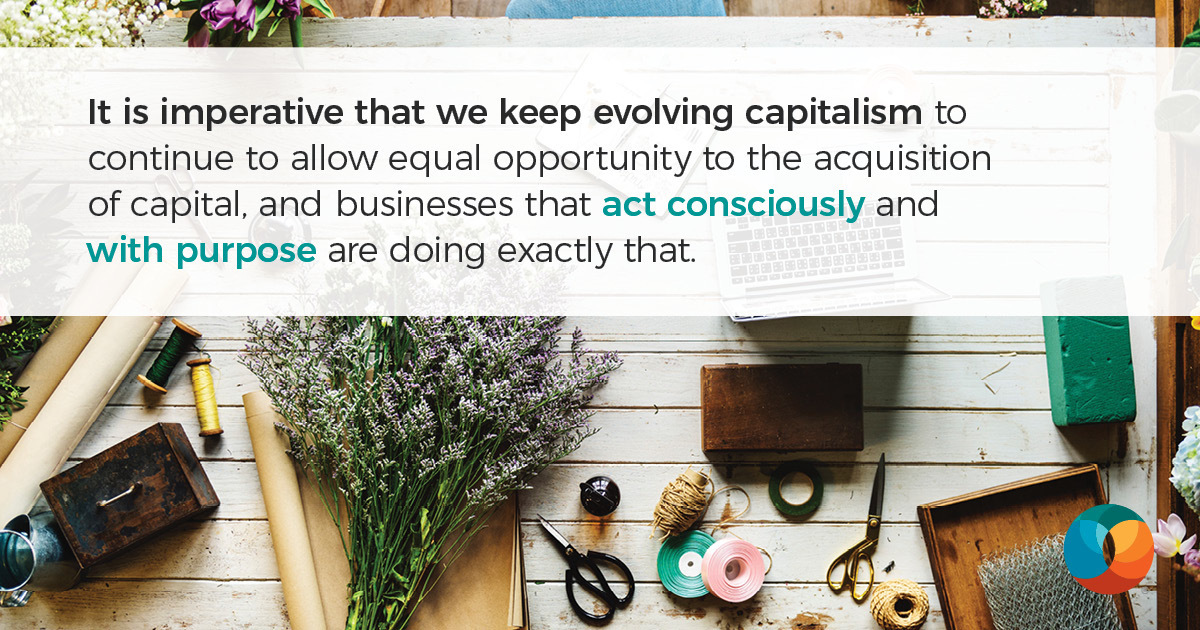 Why Consciousness Is the Key to Unlocking Capitalism’s Greatest Potential

More and more, the term “Conscious Capitalism” pops up in business and general media as the future of doing business.

But what is it, and where did the concept come from? And why is it important that businesses adopt a more “conscious” way of operating?

Conscious Capitalism started as a collaboration between academics and business leaders to articulate a better way to do business, and it is grounded in a belief that businesses truly flourish when they are organized around a greater purpose. Conscious Capitalism has now evolved into a global movement aimed at educating and inspiring business leaders to practice capitalism in its truest form.

Since capitalism was codified as an economic system over 200 years ago, humanity has experienced an exponential improvement in good-life indicators—mortality, health, and wealth, among others. But there is nonetheless room for improvement as our increasingly globalized world still leaves some vulnerable populations behind. Proponents of Conscious Capitalism believe that well-run, values-centered businesses can contribute to humankind in more tangible ways than any other organizations in society.

Some skeptics argue that “conscious” and “capitalism” don’t belong in the same sentence. But when various campaigns across the globe talk about embracing a greater “consciousness,” they are acknowledging the deep interconnectedness of all beings. With that comes a responsibility to bring greater intention to improving the lot for everyone on Earth—and that is what capitalism does best. Capitalism has done more to lift people out of poverty and escape a brutal subsistence way of life than any force on Earth. Capitalist reforms in China, India, and other developing nations have lifted over a billion people out of poverty in the last 30 years alone.

Dev Patnaik, founder of Jump Associates, a consulting firm that helps companies like GE, Target, and Procter & Gamble overcome their innovation hurdles, seeks to inject Conscious Capitalism principles into its clients’ operations to help them grow. Patnaik saw the power of capitalism firsthand when he worked in India. He witnessed what happened when India adopted a more free-market approach.

“In a small amount of time, you could see wealth—not money, but wealth; there’s a difference,” he said. “It was lifting up people’s lives.”

Yet, a stereotype of some contemporary businesses, especially in the wake of the 2008 financial crisis, is that they are powered by greed, misconduct, and exclusion—a hackneyed caricature that is compounded by popular movie portrays of fictional business leaders. The truth is that heroic, Conscious Capitalism is grounded in four unshakeable tenets: Higher Purpose, Stakeholder Integration, Conscious Leadership, and Conscious Culture. These principles are more than just theory. Major corporations like Southwest Airlines, Whole Foods Market, and The Container Store are driving their notable success and expanding market share on the basis of this paradigm of operating.

Conscious Capitalists understand that businesses inherently exist for reasons beyond profit, and that profit is not an end in itself but rather a tool for a business to achieve its higher purpose. When run with purpose, what follows are customers, employees, management, and shareholders who are more highly engaged, sparking creativity and commitment. Conscious businesses understand that all of these stakeholders—all the people and entities that have an impact on or who are impacted by the businesses—are connected and interdependent. Instead of focusing on optimizing value creation for a select few, conscious businesses optimize value creation for all stakeholders. In fact, conscious businesses recognize that some stakeholders, like the environment, are unable to speak for themselves but must still be part of the value creation equation.

Conscious businesses would be impossible without conscious leadership—stewards who keep their firms focused on their companies’ higher purpose and who are energized by creating value for all stakeholders. Conscious culture and management provide strength and stability to conscious businesses, helping to ensure they remain committed to their purpose.

Proponents of Conscious Capitalism believe the movement is a return to the way business used to be conducted, prior to being hijacked by a narrow conception focused on shareholder returns.

Sunny Vanderbeck, managing partner of Satori Capital, a conscious finance firm, said that through much of capitalism’s history, factory owners would never choose to dump waste in rivers by their plants because they lived in the community and knew people who lived downstream. Likewise, they wouldn’t try to extract extreme concessions from employees and vendors.

“Conscious Capitalism becomes an obvious choice because when you’re part of a community, that is the way you treat others,” he said.

Conscious Capitalism fundamentally rejects the view of zero-sum, trade-off oriented business practices that have given capitalism a bad rap. Conscious leaders seek creative, synergistic solutions for everybody that a business touches.

As Raj Sisodia and Whole Foods Market co-CEO John Mackey noted in their book, Conscious Capitalism: Liberating the Heroic Spirit of Business: “A good business doesn’t need to do anything special to be socially responsible. When it creates value for its major stakeholders, it is acting in a socially responsible way.”

Many people have the misconception that “doing good” means making less money—but Conscious Capitalists know that the opposite is true. Studies show that businesses that adhere to Conscious Capitalist tenets do better over the longer term—they outperform their “unconscious capitalist” counterparts.

“By delivering a genuine, no-baloney product for our guests and environment for our employees to work in, we then could deliver for our shareholders,” said Ron Shaich, CEO and founder of St. Louis-based , in a recent Austin Business Journal story. Starting from that place of authenticity and caring “profoundly about the lives of other people” leads to better financial results “because of the way the economy and capitalism works,” added Shaich.

Panera was the best-performing restaurant stock of the past 20 years, delivering an 86-fold shareholder return between July 1997 and July 2017, compared to a less than two-fold increase for the S&P 500 during the same period. The company’s stock generated annualized returns of 25 percent in the same time frame. “Which I’m proud to say is better than the returns of Warren Buffet’s Berkshire Hathaway during the same period,” Shaich said.

A Short History of the Conscious Capitalist Movement

The term Conscious Capitalism has its roots in a quote from Nobel Peace Prize winner Muhammad Yunus, a Bangladeshi economist and founder of the Grameen Bank, which pioneered microloans to poor village entrepreneurs in Bangladesh. In a 1995 Atlantic article, Yunus cited his bank as an example of a new capitalism, calling it a “socially conscious capitalist enterprise.” Ten years later, Patricia Aburdene published Megatrends 2010: The Rise of Conscious Capitalism. Later that year, an organization called FLOW—or Freedom Lights Our World—was founded with the purpose of “liberating the entrepreneurial spirit for good.” FLOW was a collaboration between corporate leaders and academics to articulate a better way to do business—an effort that has since blossomed into a global movement.

Conscious Capitalism is an idea that has been around for a long time—it’s enduring because it’s human, vibrant, and one of the most powerful tools we have for creating a better society. By whatever name, CCI remains committed to being an aggregator and distributor of the best practices, the best minds, and the most open hearts in business. Much of the tarnished reputation of big business is well deserved, but crooked crony capitalism practiced by a relatively small number of individuals doesn’t invalidate the power of capitalism. When societies changed to allow private individuals the chance to acquire capital, regardless of class or race, every metric of human well-being increased. Civilization as a whole has been lifting itself out of the mud ever since. It is imperative that we keep evolving capitalism to continue to allow equal opportunity for the acquisition of capital, and businesses that act consciously and with purpose are doing exactly that.

Capitalism is humanity’s greatest hope for helping people everywhere live their best lives. Everywhere that anti-capitalist policies have been adopted—Venezuela, Cuba, Burma—societies have been ruined.

“There’s a paradigm shift going on within all industries,” said William W. Vogelgesang, cofounder of EPOCH Pi, a conscious investment firm. “I firmly believe that 20 years from now, all businesses will be purpose-driven.”

This article was previously posted on Elevations, the Conscious Capitalism blog.