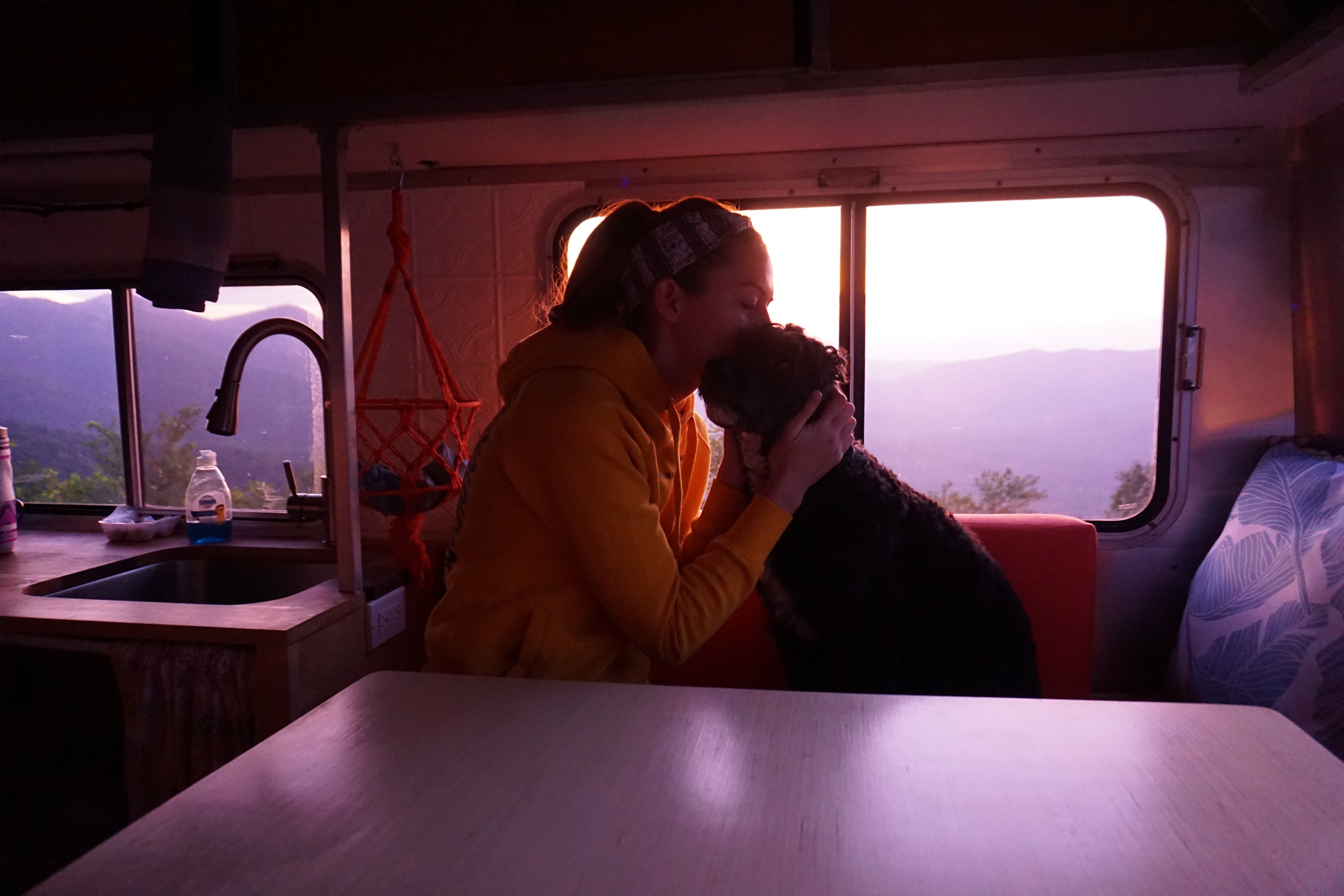 The Life of Kelsey Servi: Music, Magic, a Springerdoodle, and an RV

By: Kelsey Schurer, Executive Editor, Round Table Companies in Get to Know Us
on June 18th, 2020

Imagine a stage backlit with pink mood lighting, curtains draped and parted off to the left and right. A bright spotlight falls on a troop of swing dancers, ladies in chiffon skirts, men donning crisp bowties. In this televised production, the symphony orchestra swells outward toward the audience as it plays the big band song “In the Mood.” This is a Glenn Miller special on PBS, a favorite television pastime of Kelsey Servi when she was just a little girl.

“I was always drawn to the saxophone,” Kelsey said, remembering her first ever alto saxophone she had gotten in elementary school. Her love of the saxophone began with watching The Simpsons, as her favorite character, Lisa Simpson, also played the saxophone. As a child, Kelsey began taking private lessons in elementary school, then joined band in middle and high school and was awarded a music scholarship in college. She had loved the saxophone and played a large majority of her childhood, but in college, she began to think about her future in, as she described it, a logical way.

She originally went to UCF for a major in music, concentrating in classical alto saxophone, but then switched her major to advertising and public relations. Since graduating in 2009, she has worked as an outreach coordinator, a marketing manager, and has held positions in facilities management. Although she learned so much from these career paths, ultimately, she decided she didn’t want to work under fluorescent lights anymore. She quit her job and began to pursue her work-from-home goals, concentrating on client care support.

Because here’s the thing about Kelsey: she loves spending time with her family, traveling and exploring new places, and expressing gratitude for life as much as she possibly can. When you’ve traveled in the last two years to over thirty states—including Hawaii and twenty-four National Parks—working under fluorescent lights just isn’t your cup of tea. Adventurous at heart, Kelsey plans annual road trips with her husband Josh and her Springerdoodle Calvin to take in their RV—a purchase she was hesitant about at first but ended up being the catalyst for one of the best trips of her life.

“My husband found this 1984 Nissan Sunrader on Craigslist in 2014,” Kelsey said. “For whatever reason, he convinced me, and we bought it on Valentine’s Day.”

Refurbishing and reconfiguring the RV, they embarked on a two-month journey from Florida, their home state, all the way to the pacific northwest and back. While traveling, they would camp out on government land; they also stayed at a lot of truck stops and Walmart parking lots. One of her favorites places was the Oregon coast—she said all the beaches are dog-friendly and the ocean has all these breathtaking, massive rocks jutting out from the surface. The experience of this journey was amazing—they visited friends and met a lot of new people that they still stay in touch with today. Plus, Kelsey gained the superpower of being an expert passenger seat navigator, able to find all those highly rated coffee shops on Google Maps.

As for traveling with her husband, Kelsey said, “We are always looking for the next destination we want to visit.” 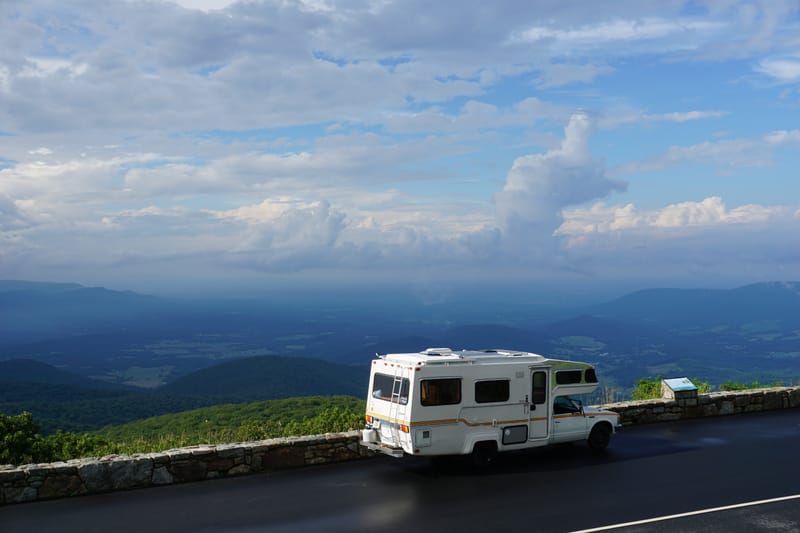 She met her husband, Josh, when she was a senior in high school and he was a freshman in college. They were both “band nerds” and hung out with a similar group of friends. They dated for six years and have been married for eight.

“He’s my best friend, and I couldn’t imagine my life without him. He motivates me to be the best person I can possibly be. We are expecting our first baby boy any day now and couldn’t be happier!”

Even with a baby on the way, Kelsey still claims that Calvin is considered to be the “first child” of their family.

“I swear there’s a human being in that little body,” Kelsey said. “He’s the kindest and most empathetic dog I’ve ever met.”

A few years ago, Kelsey certified Calvin to be a pet therapy support dog. They would go to local hospitals to visit patients and doctors, and she said it was so much fun. Calvin had to be evaluated on how well he responded to commands and walking with a leash. At one point in the evaluation, the testers had Kelsey squeeze a squeaky toy and throw it in the middle of the room. Calvin had to walk by the toy without looking at it. Of course, he failed that portion of the test.

“I think he barely passed,” she admitted, sheepishly. “I think he passed because he was really cute.”

But Calvin is not the only empathetic one. As a client care coordinator at RTC, Kelsey’s job is to create clear communication with clients, to point them in the right direction, to learn more about them and why they want to pursue their projects or want help with their organizations’ storytelling. What she likes about her job, perhaps most of all, is helping others.

“I honestly do care—I consider myself an empathetic person, treating every client with respect, trying to bring every client into our family and make that transition as smooth as possible. And help them achieve their dreams of writing a book. I mean, writing a book is a lot of hard work.” As a child, Kelsey wasn’t a fan of reading books, but her father was a big storyteller, so she grew up with the entertainment of narrative. As she got older, she stumbled across the Harry Potter series, and she fell in love.

“It led me to actually sitting down and enjoying a book,” Kelsey said. Now, she tries to make a point of reading because, as she says, it’s really good for you; it’s fun, calming, relaxing, and opens you up to new worlds. As for her favorite character, Kelsey likes Willy Wonka, played by Gene Wilder in the film adaptation of Willy Wonka & the Chocolate Factory (1971).

“I love his quirks, and you can sense that he could explode with madness at any second.”

She especially loves when the “terrible” kids face the consequences of their actions. Grounded in kindness, Kelsey feels that all of those children didn’t have to be such jerks. They had this once-in-a-lifetime opportunity to go to an amazing candy factory. Perhaps that is why this maxim by Epicurus resonates so deeply with her: “He who is not satisfied with a little is satisfied with nothing.”

As for Kelsey, she is supremely satisfied with her own life. With a baby on the way, she looks to the future and all its brightness. She says that she and Josh are planning on taking lots more RV trips with their baby boy Jack.

When asked if she still played the saxophone, Kelsey said no—and even for this she holds no sorrow. “I think I made the right decision,” she said, on changing her major years ago. Though she still keeps her saxophone in her closet. “I want to save it for Jack if he wants to dabble in it.”

And then she laughed, as if her mind was elsewhere . . . perhaps she got a glimpse of the stage, a bright spotlight landing on the shiny brass instrument, as the musicians settled into position.

“Who knows?” she said. “Maybe I’ll be eighty in a nursing home and bust it out again.”